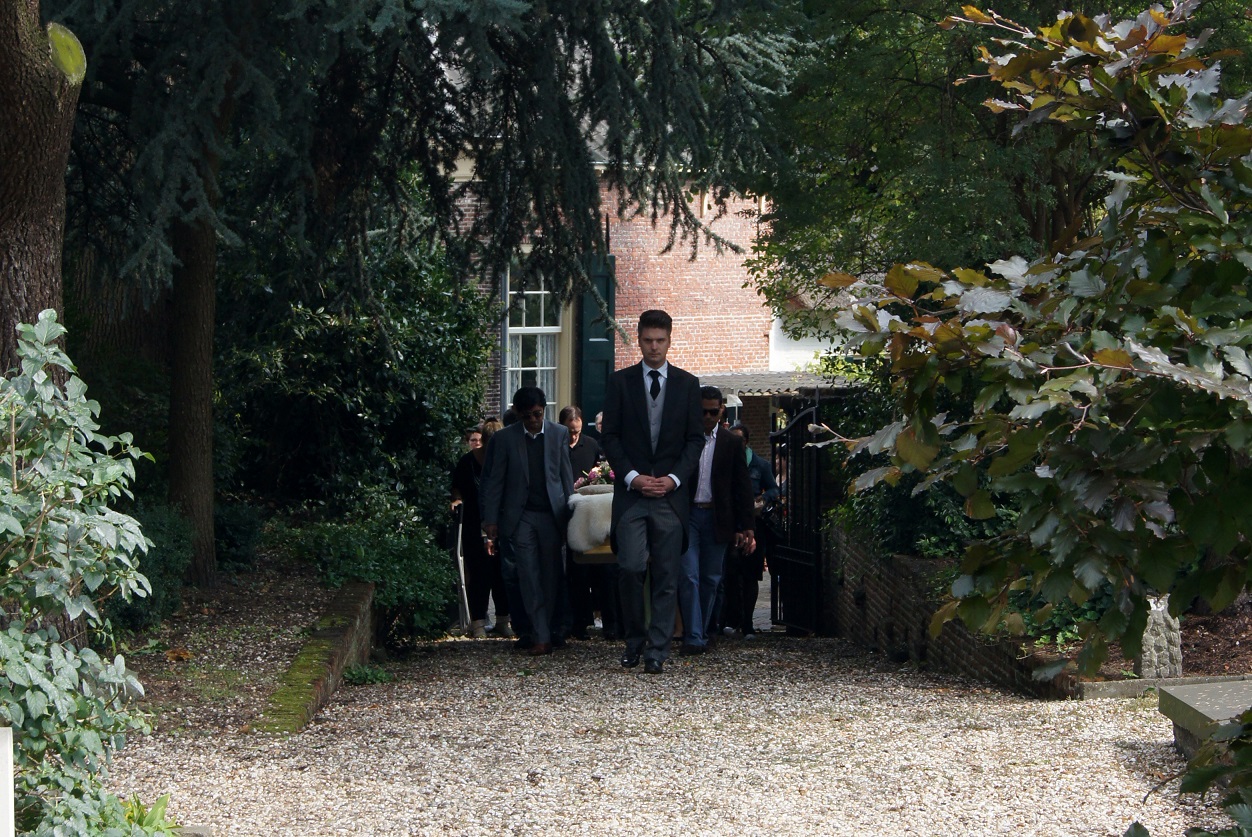 The graves at the graveyard (churchyard) behind the Dorpskerk

Since the middle- ages the church and the graveyard were of Roman Catholic origin. During the reformation (1517-1648) in the year 1573 the Roman Catholic priest Volkert Nicolaasz was forced to flee Voorschoten. It became a “general graveyard” from 1574 to 1963 in and around the now protestant church. After nearly 250 years the Roman Catholic parish of Voorschoten acquired their own graveyard. Initially, the burying of the dead was done inside the church. We find a few graves from priests in the Dorpskerk. For example, pastor van der Burg was buried on the 27th of November 1805 in the Dorpskerk. We still have 3 tombstones dated from the 17th and 18th century in the Dorpskerk. The present existing layout of the graveyard dates from 1931. The graves have been left untouched since 1963. We have 24 old family graves dating from the 19th century. Brickwork graves or celler graves with freestone covering plates.These present a monument in itself, a piece of history for our village. In addition to this, the graveyard has a few graves of persons and or families of national importance.

We start at the back of the mortuary. (Baarhuis) At the left in this graveyard are found the so-called sand-graves, divided into five compartments.

The very first grave that immediately attracts our attention is that of Nicolaas Zonneveld, (1894-1953) compartment II nr. 20, the founder of the restaurant on the Veurseweg “Eiland van ome Nick”; in his time a well-known “Voorschotenaar”, hence his name “Ome Niek” on his grave stone.

Left at the back in the corner you find the family graves of the family Eggink, section F nr. 1, 2, 3. Christoffel Eggink sr (1884-1965) was the former bulb-kings of the village. They used to live in a detached suburban house called “Henriette”, which has now become a parking area, opposite AH (Albert Heyn).

Turning back on our strides to the rear wall of the church, we find three rows of masonry built vaults. On the back row, from right to left and starting at the corner. We find the grave of O. R. I. Viveen, (1891-1969) section A nr. 68. He was the head of the children’s home Nieuw Voordorp but, also acting mayor of Voorschoten during the period 1944 and 1945.

Further to the left we find the family graves of well known Voorschoten families, like the Turion, nr. 53, family, building contractors from the Voorstraat and Willibrordusstraat (1939-1940), the “diaconiehuisjes” (parisch houses) of the church.

Further on we see the grave of Menso Kamerlingh Onnes, (1860-1925) nr. 50B notable because of the piece of music chiselled into the stone.

Ir Jacobus J. Walen is a great lover of music and owns a beautiful Stradivarius!

Next to it the grave of the most famous Dutchman Dr. Heike Kamerlingh Onnes, nr. 50, (1853-1926) professor at the Leiden University and known for his pioneering work in physics (making helium fluid by -269° C and the conductance of metals). He received the Nobel Prize for physics in 1931.

Nr. 9, The medical doctor Duymaer van Twist, (1867- 1923) who used to live in a house, “Villa Welgelegen” situated where we now have the church “Het Kruispunt” He was working from 1902-1911 as medical doctor in Modjowarno, Java, the Dutch East Indies. After that in Hoogeveen. From 1917 in Voorschoten.

Then we have the family grave, nr. 31, of Pompe van Meerdervoort. Jean Antoine Jonkheer, (1794-1874) the son of the first mayor of Voorschoten, (1811-1817) following the French period, is buried here. He was army officer: “Kapitein der infanterie”

His grandparents lived on the farmhouse “Adegeest”.

Next is the burial grave, nr. 14, of the Treub family. Jacob Petrus Treub (1818-1887) was the mayor of Voorschoten from 1841-1887. He had 3 famous sons. Dr. Melchior, who was a botanist, Dr. Hector a gynaecologist and the most famous, Dr. Marie Willem Frederik Treub, economist and statesman, minister of Agriculture and Finance in World-War I. He in fact was the founder of liberalism in the Netherlands. He is also buried in this vault. In 1950 it was renovated and a memorial service was held. The birth place of the Treub’s sons is the present bakery Verhoog, Treubstraat 15. A memorial brick stone reminds us of this fact.

We find the oldest grave, (1830) nr. 19, of another famous man, Dr Petrus de Raadt. (1796-1862) He was a renowned teacher and pedagogue and founder of the Noorthey Institute, where many of the nobility received their education, for example, prince Willem the brother of Queen Wilhelmina, at that time crown prince. The Noorthey Institute was situated at Schakenbosch, Noortheylaan and later moved to the suburb Stadwijk and thereafter became the children’s home Nieuw Voordorp. A memorial took place in 1870 at his grave by former pupils/students. English teachers introduce cricket, hockey and foodball ! (1854) to Noorthey institute.

On the left hand of the path we find the burial vault of the Duivenvoorde Castle. This vault used to lie inside the old church and dates back to about 1380.

L H baroness Schimmelpenninck v d Oye (1891-1965) was the last person to be placed in the vault, in 1965. White casket left. The vault holds seven caskets the oldest from 1849 and the latest from 1965 that have been laid to rest. Below right, a charnel casket.

In the graves section at the end of this path we find the grave, section B nr. 74, among others, of Harmen Douma, (1880-1944) head of the first Leiden School Association. Strictly speaking this is a war grave, however all remains have been moved and laid to rest at the cemetery of honour in Loenen.

At the end of the path we have a section of 6 graves. One of them is the family grave of Deurloo, section C nr. 82. His family owned the “Hotel het Wapen van Voorschoten”, previously known by the name of Hotel Deurloo. Their 5 year old daughter died from a fall and when she was laid to rest, her father had heart failure and died. Three days later he was laid to rest in the same grave.

The follow grave (left), nr. 84, we visit is of the two police officers who died together with mayor Berkhout. The text read: “In memory of a fatal accident on the 9th of August 1944, whereby police officers of this municipality, Adriaan Leeuwis born 17-2-1913, and Hendrik de Vrij born 20-4-1913, tragically died. Later both spouses were laid to rest in this grave.

Memorial tablet. They be killed in the Dutch East Indies.

The upkeep, by a group of volunteers of the Protestantse Gemeente Voorschoten formed: the “kerkhofteam”(graveyard team), consits mainly in maintaining the present character of this graveyard by checking inconvenient rampancy, weeding really undesired plants, lopping and maintenance of pads and graves.